It’s official, and officially slick-looking. Our first single from our upcoming album “Love Monster” is going to be AVAILABLE on all streaming platforms and other music networks and various dongles next week. Stay tuned on 12/15!!

As a species below the age of 40, we don’t really use “websites” anymore. But it’s still the best place for Google to find out the good stuff we’ve been doing.

What’s new? Well, we’re hard at work on our upcoming album “Love Monster,” which is coming out in 2022. We also recorded 4 hours worth of video and music at Leesta Vall Studios in Greenpoint – it was an amazing experience to cut records in real-time and really explore our catalog. Our music is a monolith to different eras. The era of “Dream Harvest” comes to a close at the end of this year.

“Love Monster” will conquer 2022. It’s got so much new and interesting material and we can’t wait to share it with everyone. But in the mean time, check out these four gems from last month:

Oh… and we’re so professional now that we already have March shows scheduled.

We love you and even though the world tries to mess with your reality, just remember that your existence is your own.

Do you want a relaxing jazz album to ease the endless woes of 2020?

Well, first off, Bandcamp has started 100% revenue share Fridays. That means that if you buy this album – or any other album from Bandcamp – the money goes directly to the band. So that’s awesome!

Second, with our down time from playing shows, we’ve taken some time to dig througho ur old recordings and videos and we kept coming back to this one. This show marked a pretty special time for us – we had finally started playing shows in New York and we were hammering out what our first EP, “Systems Online” would sound like. There are even three songs on here (“Recovery Steppes”, “What’s Right is Right”, “Version Control”), that didn’t make it on the final album and ended up being B-sides, instead. Three weeks after this show, we played Pianos for the first time… which would eventually result in a residency and main stage shows that we would play almost every other month until the, uh, pandemic.

Third, we’ve always loved playing breweries. Usually, the sets are longer and that gives us the freedom to explore and challenge ourselves as musicians, which results in some really special moments.

And finally, Newburyport has always been the home base for Job Creators. Whenever we play shows there, it’s usually a big family & friends affair. In this set, you can hear all those people in the background. The effect is almost like an old-timey recording in jazz lounge.

We hope you enjoy this new old album. Thanks for listening in what has been a really, really noisy year.

Our new album is officially out and ready for your listening pleasurezz!!

We hope you enjoy it, this album was a joy to make and we’re so excited to share it with everyone.

Give “Dream Harvest” a listen here:

The beta test for Dream Harvest, our new album, is upon us! Not quite the album launch…. but we are getting there.

At 10pm in Friday, we will be taking the stage at Pianos to debut all new songs from the album.

Come and join us as we slowly but surely usher it into the world!! 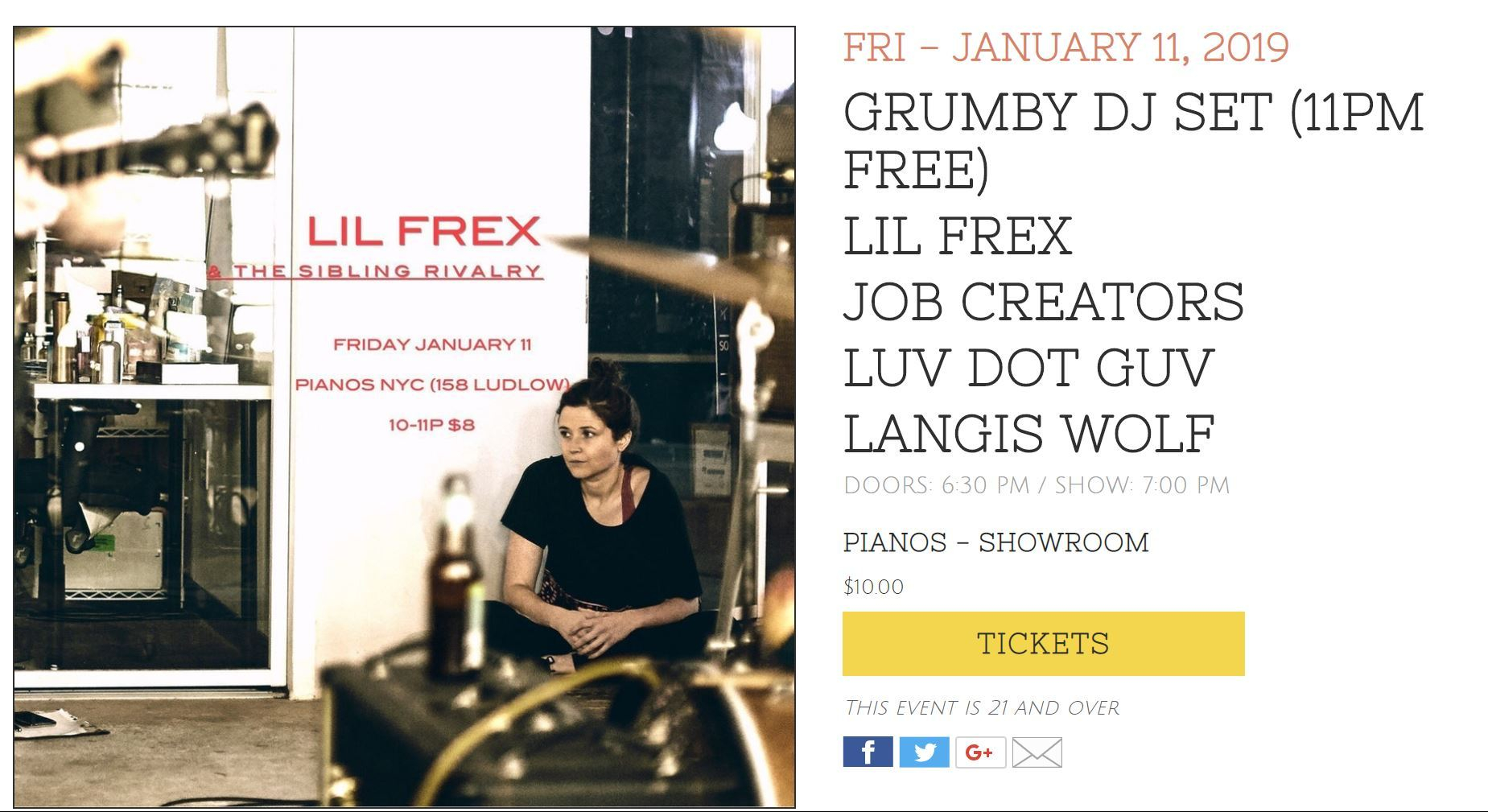 We are beyond pumped to be playing the first show of the year at one of our favorite places – Pianos NYC! Come join us ring in 2019 in style… we’ll be playing some new songs and trying out some weird new crap on stage.

We go on at 9pm. Check out full show here!

Another show in Salem this Saturday! Come check us out at Koto. Show starts at 9pm!

Hi hi hi hi, we are playing Pianos again! Come to our show on September 8, we’re playing at 10pm with a bunch of other awesome bands. It’s a Friday so eat drink listen and merrify!! 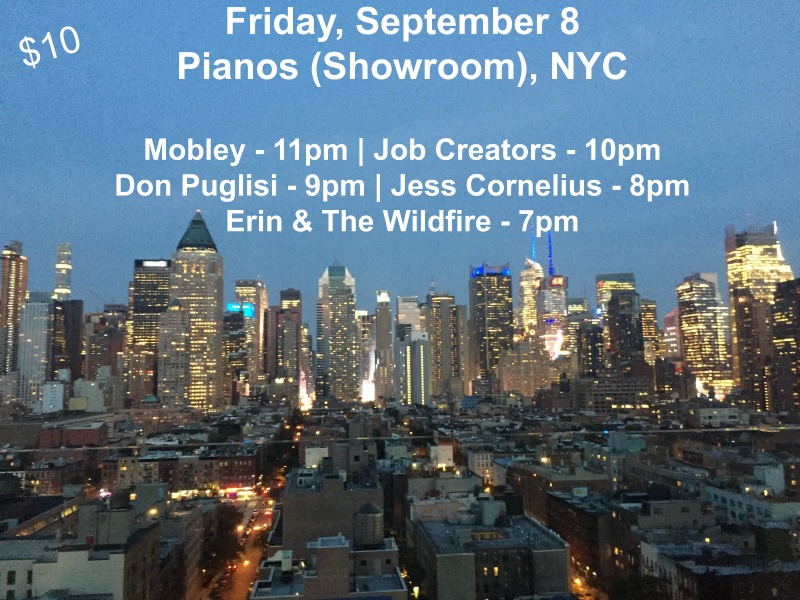 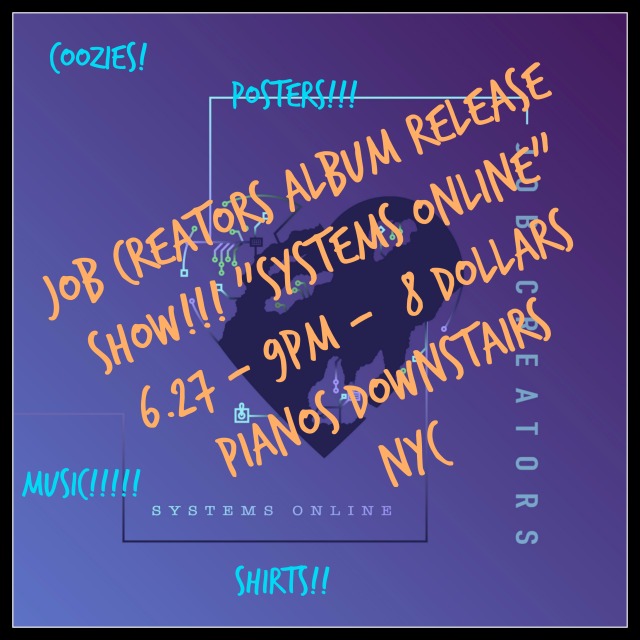 FRIENDS – the day is arriving, swiftly.

On Tuesday, 6/27, we’re going to be playing one of our favoritest playces in NYC – Pianos! We’ll be downstairs and we’re on at 9pm, debuting tons of amazing merch and the actual mixed mastered and beautified album, “Systems Online”!

So come celebrate with us by turning your systems online!